I have no records about early Augustus Siebe helmets being imported in the Netherlands but it is certain that helmets of his design were imported and used in Holland later in the 19th century (perhaps even after the death of Augustus Siebe in 1872). The name of his company changed two years before his death from ‘A.Siebe’, to ‘Siebe & Gorman’ (1870), then to ‘Siebe, Gorman & Co.’ (1880) and finally in 1904 to ‘Siebe, Gorman & Co Ltd’.

Augustus Siebe founded his company in 1819 and produced several different products before manufacturing his first diving apparatus. The first helmet he made was of the Deane design (see the Deane chapter)

Augustus Siebe as shown on the title page of several editions of ‘Deep Diving and Submarine Operations’ by Siebe Gorman Director Robert H.Davis.

Christian Augustus Siebe was a German-educated inventor and gifted engineer who emigrated to London and founded his own company in 1819. Augustus Siebe had the engineering skills to build helmets for the Deane brothers (see chapter: ‘1836 Deane’). He improved upon the basic design of the Deane helmet using 12 equally spaced bolts and brass-straps to provide a watertight connection to a diving suit. He also engineered a neck ring with an ‘interrupted’ thread which made it possible to separate the bonnet from the breastplate quickly and easily. These improvements brought A.Siebe worldwide recognition as the engineer who invented, developed and manufactured the flexible ‘closed’ diving dress. The initial Deane helmet was little more than an open ‘bucket‘ carried on the divers shoulders which would flood with water when the diver bent over to far. However, after A.Siebe’s final improvements it was impossible for water to enter the helmet ‘dress’ no matter what position the diver assumed.

Recently there has been some speculation and argument among British diving historians as to whether Augustus Siebe can be credited completely with the invention of the ‘closed’ dress diving apparatus. However, as there is little documentary evidence to the contrary and given what I know from my archive, I will leave the credit of invention with Augustus Siebe, unless more evidence is found.

Augustus Siebe improved the design of the Deane helmet in several ways. A threaded front-window could be screwed into place and easily removed from the front of the helmet. Between the bonnet (helmet) and the breastplate, rings were incorporated using an ‘interrupted’ thread which made it possible to easily separate the bonnet from the breastplate. Finally, Siebe re-designed the ‘open’ dress apparatus into a ‘close’ dress apparatus by using brass straps on the edge of the breastplate. This made it possible to clamp a suit to the helmet, thus providing a water tight connection (see picture above). The diver could now stay dry in any position, even upside-down.

An illustration from the ‘London Illustrated News’ of November 24, 1855 showing A.Siebe’s ‘Improved Diving Dress’ next to an article about a demonstration of several new inventions for the Emperor Napoleon in Paris. Also demonstrated next to A.Siebe’s apparatus is diving apparatus from Heinke and Cabirol. Original newspaper, David L.Dekker collection.

Augustus Siebe’s son Henry and son-in-law William Gorman took over the family business in 1870 and the firm’s name was changed to ‘SIEBE & GORMAN’ Augustus Siebe died in 1872. The helmet shown below still has oval side windows with thin frames, and the glass used is thin and convex (lens-like) 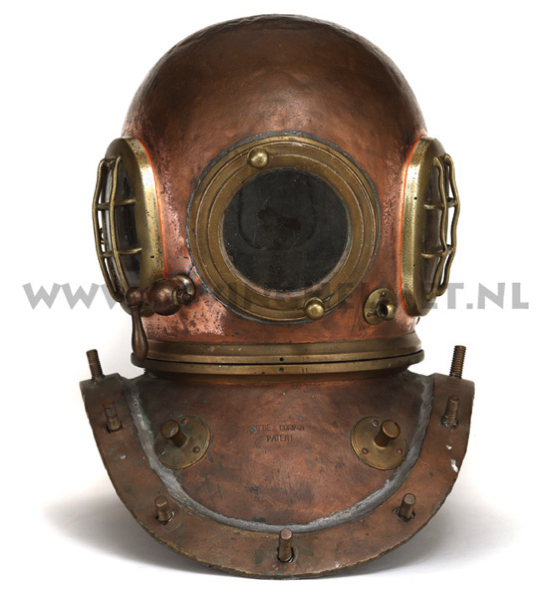 The helmet shown above was made around the time of A.Siebe’s death in 1872. It was found several years ago in poor condition and has required substantial repairs including deep soldering around the side-windows and spit-cock (see photo details). Restoration is still progressing, hence the metal around the side-windows is still bare. Unfortunately the brailles and nuts are missing. If anybody has or knows of a set of brailles, or a complete spare breastplate available for this type of ‘Siebe & Gorman’ helmet, then please contact me. Photographs, David L.Dekker

I located this helmet many years ago in Sweden (see above photographs). The strange circular box on top once held parts for an early version of a diver’s electric telephone. The side-windows are of a design which I believe were introduced around 1880 and used in the Siebe & Gorman ‘Improved Diving Helmet’. Even though helmets with thin, ‘oval’ side-windows were made at this time (or even after this new design was introduced) the concept of strong, thick side-windows of plain glass were later incorporated into the ‘oval’ side-window design.

Photographs, David L.Dekker. (Members of the Historical Diving Society USA may recognize the helmet: In volume 17, Issue 1 Number 58, Spring 2009 I wrote an article which was published about this helmet).

In 1881 the company name changed once more to ‘SIEBE, GORMAN & Co.’ The first helmets produced had the company name still stamped directly into the copper of the breastplate, while later ones had a ‘cast brass company badge’ instead. The side window frames are more heavily built compared to the previous oval side-window frames of the Siebe & Gorman helmet of circa 1870. The thin, convex window glass changes to thick, flat, plain glass. Bars of the side-window grills are at two levels (vertical bars pass over the horizontal ones). The design and position of the exhaust valve has also changed. The helmet shown above was discovered in Madrid in 1998. Photographs, David L.Dekker

1880. Siebe, Gorman & Co 12-bolt helmet (with the company name stamped in the breastplate and thick oval side windows)

A dutch diver in a Siebe, Gorman & Co equipment at working  a canal near the dutch Town Eindhoven. Photo collection David L.Dekker.

Another SIEBE GORMAN & Co. helmet which shows significant wear compared to the previous helmet. Notice it no longer has the company name stamped directly into the breastplate, but has a cast brass company badge instead. The Braille wing nuts on this helmet are new but do resemble the wing nuts from an original helmet. This helmet was discovered in the Northern Europe in 2004. Photographs, David L. Dekker